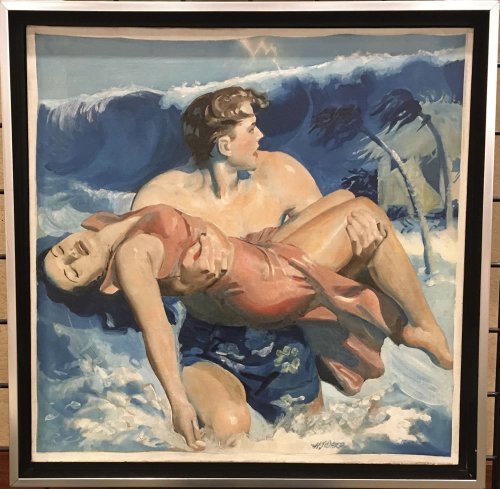 Comment: Few of the pulp artists made as indelible a mark on their craft and our perception of the tenor of the times as did Ward. This is an interesting example in that unlike many of his featuring (for example) ice-pick wielding maniacs, this shows conflict with the elements. While I was at Windy City Pulp and Paper Show in September 2021, I spoke at length with a guy who’s a lot smarter than I am. That in itself is not noteworthy, n but let me explain. Both he… and a good customer who’d seen pictures of the show… both felt that the color shift that we see when comparing the painting to the magazine is not a case of the color somehow going out of the canvas. Their independent suspicions is that the magazine (which by the way only lasted for four issues) had commissioned ward for what was to be a nighttime, or at least dusk, scene. As such the colors were muted. By the time that the magazine was to hit the newsstands, the change to a daytime scene was called for. So, rather than spend the money to have the artwork redone, the publishers simply had the printers heighten the yellow dramatically.
Price: $9,750  (includes domestic shipping)