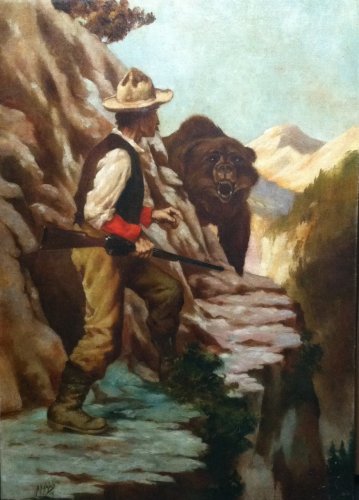 Description: Surprised by a bear.

Comment: This is an extremely interesting piece...probably as much for what it is not as for what it is. What it isn't is the original from which the advertising image used by Remington Arms as “Right of Way” was created. That honor goes to The Howard Pyle student Phillip R. Goodwin. A client who knows a whole lot more about arms advertising than do I has enlightened me that the Goodwin piece, for which he was paid $125, was completed on August 21st, 1906 for Forbes Litho Manufacturing Co. of Boston. Remington was their client. The Goodwin image is not signed. This piece is so similar in many aspects to the printed Goodwin poster/calendar design that it leaves one scratching one's head. Being dated 1908 it followed the completion of Goodwin image by a year and a half or so.

So why would Nichols, an established illustrator in his own right, recreate so closely the Goodwin painting? I'm afraid that the full answer is likely lost in the sands of time. There are though theories that ring of possibility. One being that this image was recreated for Remington for another usage. Or, that another company commissioned Nichols to create something very similar to what Goodwin had done. This second theory doesn’t really hold water as Remington would both have had a proprietary interest in the Goodwin piece and was an advertiser with enough horsepower that Goodwin’s painting would already have been widely circulated. Another theory that doesn’t quite make it is the idea that Nichols did this simply as an exercise… being nearly 50 at the time though, it would seem that he’s have better ways to spend his time.

MY theory of the moment is that a collector in 1908 so admired Goodwin’s painting based on reproductions that he or she had seen that they commissioned Nichols, presumably a friend, to recreate Goodwin’s painting. There are enough variations, minor though they are, that this work would not have been confused with Goodwin’s. As I say, it’s a theory and am always happy for input from people who like to ponder such things.

This is a tough piece to price for the reasons outlined here. So, I've tried to leave aside the finer points of debate and base the price on the image.